Celebrating the First Anniversary of the UFS R2O Project! 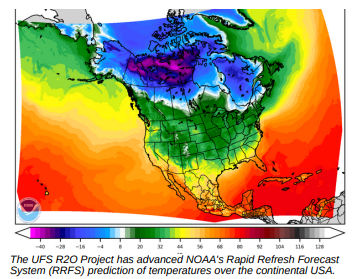 Flash back to late 2019 — the Unified Forecast System (UFS) concept was finally coming to fruition. A new, open-source, community-based Earth-modeling system is being established that will form the basis for NOAA’s operational prediction systems for decades to come. Sounds wonderful, right? But wait — how is this actually going to work? How will new innovations from the research community actually be integrated into NOAA’s UFS-based prediction system, tested and implemented in operations?

That’s the conversation we were having at the beginning of 2020. It was clear that the old way of doing things, with separate funding and management for projects in NOAA research labs, NOAA operations, universities and cooperative institutes was not up to the task. Thus, the concept for the UFS Research-to-Operations (UFS-R2O) project was born. A new way of doing business, with coordinated funding and project management across NOAA aimed at integrating new research into the operational UFS

The UFS-R2O project was conceived with a focus on leveraging the nascent UFS community to build two new operational predictions systems from the ground up – a six-way global coupled (atmosphere/ocean/land/sea-ice/wave/aerosol) ensemble system for medium-range and seasonal to sub-seasonal (S2S) prediction, and a regional, high-resolution hourly-updating and convection allowing ensemble system for prediction of severe weather. The project began in July 2020 as a collaboration between the National Centers for Environmental Prediction (NCEP) Environmental Modeling Center, 8 NOAA research labs, The National Center for Atmospheric Research (NCAR), the Naval Research Lab and 6 universities and Cooperative Institutes.

Here we are almost a year later, and although we have a long way to go to achieve our goals, we have made some significant progress. Most importantly, we have built a collaborative framework and established cross-institutional teams that are working together to achieve the common goal of improving the nation’s COMMUNITY RESEARCH THE UFS R2O PROJECT operational forecasts. The “U” in UFS means unified, not only because a single modeling framework is being used across the full range of forecast applications, but also because we have a unified approach and a unified development team, with NOAA and non-NOAA team members working together toward a common goal.

“Those of us inside NOAA have learned that the value of working with people outside the organization who bring a fresh perspective and new ideas far exceeds the cost, and those of us outside NOAA have gained new respect for the challenges inherent in an operational forecasting environment. Despite some growing pains and challenges posed by a global pandemic, we have some significant accomplishments under our belt after one year,” says Dorothy Koch, Director of the Weather Program Office (WPO) at NOAA’s Office of Oceanic and Atmospheric Research (OAR).

First off, the global coupled prediction system that will ultimately support both the operational NOAA Global Ensemble Forecast System (GEFS) version 13 and Global Forecast System (GFS) version 17 is beginning to come together. A series of retrospective 35-day coupled forecasts for the period 2011-2018 have been completed using prototype versions of the coupled system, each with incremental improvements to the component models and the coupling infrastructure. These improvements include upgrades to the atmospheric physics suite to address known model systematic biases.

A prototype coupled data assimilation system has been developed that can update the ocean, sea-ice and atmospheric states, and will soon be extended to include land state updates. This coupled data assimilation system will be used to generate a 30-year reanalysis of the coupled system. Stochastic parameterizations of model uncertainty, currently operational in the atmospheric component, are being extended to the ocean and land components so that ensemble predictions will more accurately represent forecast uncertainty in the coupled system. An in-line atmospheric aerosol prediction capability is being tested, which allows aerosol feedbacks through the atmospheric physics.

“All of these activities are supported by the development of robust and extensible software infrastructures for model component coupling, data assimilation and forecast verification/validation. Crucially, this is all happening in an open, collaborative environment using github code repositories that are accessible to the entire UFS community,” adds Jamese Sims, Acting Director of the Office of Science and Technology Integration (OSTI) Modeling Division with NOAA’s National Weather Service (NWS).

Secondly, the development of a limited-area convective-scale short-range ensemble prediction system that will form the basis for the Rapid Refresh Forecast System (RRFS) and the Hurricane Analysis and Forecast System (HAFS) is moving forward toward operational implementation. The UFS convective-scale limited area configuration utilizes the same software infrastructure as the global coupled system, with the same atmospheric dynamical core. This will allow for considerable simplification of the NOAA production suite, which now consists of several separate modelling systems running for hurricane and severe weather prediction applications.

Baseline configurations for the UFS hurricane application (HAFS) and the high-resolution hourly updating continental-scale system (RRFS) have been established, and will form the basis for testing new developments culminating in operational implementations in the 2023 timeframe. A public release of the regional high-resolution limited-area UFS application (the short-range weather or ‘SRW’ application) that underpins both the HAFS and the RRFS is now available (see article in the Winter edition of this Bulletin).

Since even an hourly updating system is not sufficient in rapidly evolving severe weather situations, a Three-Dimensional Real Time Mesoscale Analysis System (3D-RTMA) is being developed that will update hourly RRFS forecasts with newly arriving observations. The 3D-RTMA system, also scheduled for operational implementation in 2023, will replace the current surface-based 2D-RTMA system, enabling improved situational awareness for aviation and severe-weather applications by providing a depiction of the full 3D atmospheric state at 15 minute resolution.

“These are all major steps toward the ultimate goal of an operational, community-based unified forecast system that produces the best forecast guidance possible from convective to seasonal time scales. We hope that the collaborative environment that we are building will form the basis for ever more rapid improvements by making the process of transitioning new developments contributed by the UFS community into operational prediction systems faster and more efficient,” says Brian Gross, Director of NWS’s Environmental Modeling Center (EMC) at NCEP.

We want to take this opportunity to thank our collaborators for their dedication and hard work over the past year. It’s truly inspiring to see what can be accomplished when artificial organizational boundaries are relaxed and people with a shared passion and vision are brought together to build something new. We look forward to refining the process to make the collaboration even more productive, and bringing in new team members from the UFS community to contribute to the improvement of the nation’s operational prediction systems for the benefit of all of us.