With the advent of the Unified Forecast System (UFS), the operational model development at the National Weather Service (NWS) is becoming increasingly a collective effort that includes contributions from multiple NOAA labs, national agencies and university research groups. In this context, the UFS community as a whole seeks to better understand operational forecast challenges and requirements within the NWS. The NWS forecasters are the primary stakeholders of the UFS’ operational products, and therefore, continued engagement with them is important to stay abreast of the real world performance of the model and its general utility in society

The NWS forecast community includes 8 forecast centers within the National Centers for Environmental Prediction (NCEP), and local Weather Forecast Offices that come under 6 NWS regional headquarters including Alaska, Central, Eastern, Pacific, Southern and Western regions. Additionally, the NWS Office of Water Prediction (OWP), NWS Meteorological Development Laboratory (MDL) and the Federal Aviation Administration (FAA) are other stakeholders of the UFS and its operational products. Feedback from forecasters and stakeholders is one of the key drivers that informs the funding offices on research and development priorities. For the purposes of these modeling-oriented workshops, the NWS Center and Regional Offices served to represent the broader state, local and private forecast community.

Engaging stakeholders in the UFS 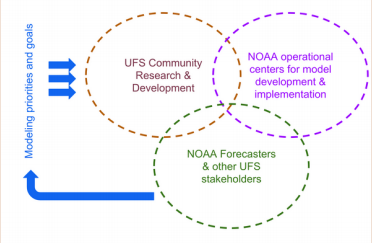 In order to foster communication with the forecasting community, the NWS Office of Science and Technology Integration (OSTI) Modeling Program Division in coordination with the OSTI Research to Operations (R2O) Program conducted three workshops during November to February 2020-21. The key objective of these workshops was to identify top forecast priorities and modeling gaps within the operational weather prediction systems at the NWS, particularly focusing on the UFS Medium Range Weather/Subseasonal to Seasonal (MRW/S2S) and Short Range Weather (SRW) Applications (See more on UFS Applications here). Other goals of the workshop included articulating forecast system improvement goals to the NWS leadership and using workshop results as a starting point to streamline modeling requirement assessments with OSTI Analyze, Forecast and Support (AFS) Office.

Prior to the first workshop, organizers launched a datacall, where each interested organization was requested to provide details on the UFS models and products relevant for their forecast mission, and outstanding issues and concerns in regard to forecast accuracy and model performance. The issues and requests collected from the datacall were organized into two broad categories: 1) those related to research and model development and 2) concerns related to computing, ensembles, data access and visualization. In the workshops conducted thus far, the focus has been on the first set of requests, considering their immediate impact on the model development goals. The second set is saved for consideration and discussion at a later time. A summary of the first set of concerns showed that precipitation and wind related issues topped the list and were closely followed by convection, marine issues and winds and air quality

The workshops were of 3 hours duration each and included short presentations, interactive sessions, panel discussions and an open floor for question and answers. In addition to the forecasters and the modelers, representatives from the UFS community, NOAA’s NWS and OAR Program Offices, OSTI AFS and a few UFS stakeholders outside of the NWS attended these workshops.

The first workshop (held on November 16, 2020) focused on discussing forecasters’ concerns under a broad array of topics including convection, winds and terrain issues, precipitation, floods and Hydrology, tropical cyclones, visibility, marine/coastal issues, temperature and air quality, and space weather. These concerns were later synthesized and shared with the UFS model developers and evaluators. The follow-up workshops held on January 29, 2021 and February 11, 2021 focused on key concerns of the UFS Medium Range Weather (MRW) and Short Range Weather (SRW) Applications, respectively. These workshops, led by the UFS Application leads, along with operational model developers and evaluators at the NCEP EMC, focused on connecting the forecast concerns with model specific issues and known biases. 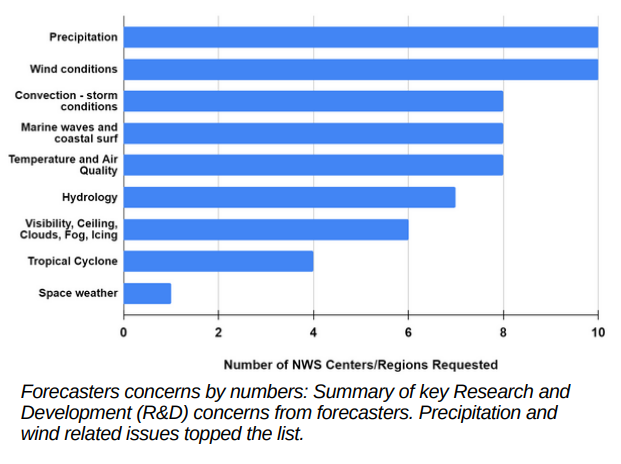 The key outcome of the workshop is a finalized list of forecasters’ requests for the UFS MRW and SRW Applications that consists of a total of 23 issues classified under 7 major topics, which are 1) Surface temperature and moisture, 2) Precipitation, 3) Convection, 4) Winds, 5) Tropical cyclones, 6) Marine waves, winds and sea ice and 7) Space weather.

Overall, the workshops brought the UFS community to a new level of synergetic coordination that strengthened the link between model development and forecasting challenges. Discussions between the forecasters and the modelers proved fruitful in that many forecast issues that appeared as independent disconnected items in the beginning of the meeting could later be tied to a few underlying model issues or development priorities. Some of the development priorities thus emerged are Boundary Layer (BL) over the land and ocean, air-sea coupling, land surface processes, land initialization, microphysics and sea ice, and marine winds and waves. The Model Evaluation Group (MEG) at the NCEP EMC, played a pivotal role in connecting the dots and bringing some of the key underlying issues to the forefront.

While the above list is a starting point that helps to shape the UFS development goals for the MRW/S2S and SRW Applications for the near-term, the UFS community is committed to continue the conversation and facilitate opportunities for ongoing engagement with the forecasters.